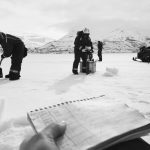 Sea ice was a once prevalent feature of the Arctic, but we are in a time of change. Svalbard is one of the most rapidly changing Arctic regions, with fjordic systems changing from an Arctic to an Atlantic state. Alongside this change, is the either lack or unpredictable formation of sea ice. Not only an important habitat for charismatic marine mammals, such as polar bears, sea ice is a whole ecosystem itself. Living within the tiny (<1mm) channels inside of sea ice, a diverse community consisting of viruses, bacteria, ice algae and metazoans can be found. …  END_OF_DOCUMENT_TOKEN_TO_BE_REPLACED

Climate change in Arctic coastal systems leads to declining sea-ice and sea-terminating glaciers, and these changes are expected to modify biodiversity and ecosystem functioning in the littoral fjord areas in Svalbard. In addition, influx of Atlantic water and invasive species, which may compete with and displace Arctic species, may change community composition and spatial distribution.…  END_OF_DOCUMENT_TOKEN_TO_BE_REPLACED

Vegetation, especially mosses, play an important role in insulating the soil from increasing air temperatures, potentially reducing permafrost thaw, thus leading to a reduced active layer depth (ALT). As of now, we have little knowledge on how the different plant communities on Svalbard affect ALT beneath them, and whether the insulating effects of plant communities…  END_OF_DOCUMENT_TOKEN_TO_BE_REPLACED

Bryophytes dominate in wide regions of the Arctic, also presenting the dominant vegetation cover on Svalbard. The layer of bryophytes in moss tundra, with its insulating abilities, is a significant factor in preserving permafrost. Herbivore activity such as goose grubbing may damage and remove parts of the moss layer, and is expected to be a…  END_OF_DOCUMENT_TOKEN_TO_BE_REPLACED

In high-arctic tundra, vegetation is facing severe challenges due to climate-change-induced warming, shifts in seasonality and potentially increased herbivore pressure. We expect shifts in vegetation from moss-dominated to vascular plant-dominated communities, as well as species shifts within these groups. While mosses are a major component of high Arctic vegetation that is subject to climate-induced change,…  END_OF_DOCUMENT_TOKEN_TO_BE_REPLACED

Insulation capacity of moss species and their effect on permafrost thaw

Mosses play an important role in insulating the soil from increasing air temperatures, reducing the impact on the permafrost. As a result of increasing temperatures and precipitation, the vegetation composition in the Arctic is changing. This shift will likely impact the active layer and permafrost underneath, which could lead to a change in the release…  END_OF_DOCUMENT_TOKEN_TO_BE_REPLACED 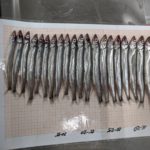 What are the seasonal changes in the energetic value of macrozooplankton and fish in the Barents Sea? How might these changes affect an organism’s susceptibility to stress? Project description: The Arctic, and in particular the Barents Sea, is experiencing the effects of climate change more intensely than anywhere else on the planet, as well as…  END_OF_DOCUMENT_TOKEN_TO_BE_REPLACED

Testing & improving the first (bèta) versions of the ArtsApp key for Vascular plants in Svalbard Project description: BioCEED is developing ArtsApp, a digital taxonomic key which is mostly used through a phone application. At the moment, a key for all of Svalbard’s vascular plants is in the making. This key is different from most…  END_OF_DOCUMENT_TOKEN_TO_BE_REPLACED

Not all flowers are equal: Plant-pollinator interactions in a changing Arctic 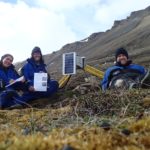 Secrets of success in Saxifraga oppositifolia

Has autopolyploidisation(s) (diploid to tetraploid in particular) created a shift in reproductive parameters? Project description: In this project I aim to investigate consequences of autopolyploidy on phenotypic variation, with focus on reproductive strategy and reproductive output. I will use the circumpolar, arctic-alpine plant species Saxifraga oppositifolia (Saxifragaceae), where two main ploidy levels are known (diploids…  END_OF_DOCUMENT_TOKEN_TO_BE_REPLACED